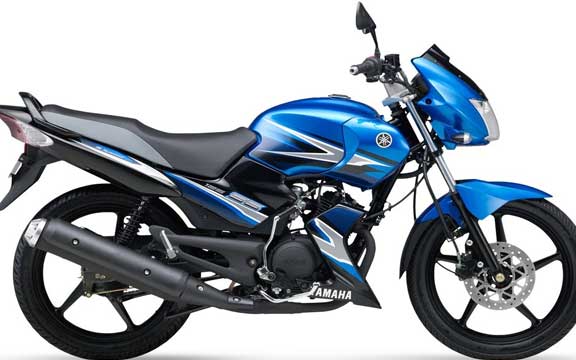 Yamaha Saluto is a 125cc super bike from Yamaha that is stepped one step forward from the rest of its bikes in a way that it gives 10.9 BHP @ 7500 rpm and a 10.4 NM @ 6500 rpm. The bike comes with a manually operated gear box that supports 5 speed levels. The bike is packed with awesome disk brake of 24centimeters diameter for the front wheel while 13centimeters drum break for the back wheel. The bike is expected to bring about a shift in sales of Yamaha company with its style, sleek finish and mileage.

The Yamaha Saluto is expected to be priced at a rate of 55,000-60,000 Indian rupees approximately. What can be more awesome than to have a disk break enabled 125cc bike at this cost and that too from a big company like Yamaha. Everybody is hence excitingly waiting for this bike to be launched on 17 april 2015. There is a 5-geared gearing system positioned in the new Yamaha Saluto that makes us drive the bike at five variable speeds. The displacement offered is 123cc and there is a carburetor fueling system within it. The front brake is a disk type of break that is 24cm in diameter while the back drum break is 13cm in diameter. There is a telescope fork front suspension used while the rear suspension is swing arm based.
The digital speedometer adds to the looks of the bike while as you may get even the minute details of your speed. The tachometer is analogue type while the trip meter and odometer are the digital one. Besides it, even the fuel gauge is the digital one. With the contemporary world going so digital, YAMAHA salute is going to be an awesome choice for all.

This bike is expected to be an awesome choice for the customer in terms of comfort for both the driver and the pillion passenger. There is a grab rail as well as backrest for the passenger, there are footrests fixed at the lower part of the bike that enables both the driver and the pillion passenger to keep their legs comfortable while driving. The bike is an electric start one that proves to be power saving as well as time saving for all.

Just imagine, you are on a road full of traffic while the traffic light is red, you have switched off your engine. Suddenly the light goes green and then you are kicking off your bike and patrolling it with legs in order to get it ahead somehow. This is not the scene with new Yamaha Saluto. The electric start mode saves enough of your time rather.

Comparison of The Lighting System:-

If I talk about the headlight and indicator system, Yamaha is equipped with a fine indicator system and rather the headlight system adds to the awesomeness of this bike, there is a 12V 35/25W Halogen bulb that gives bright and clear light out of it. With Yamaha salute , the bike is an awesome choice, especially made for the Indian roads.