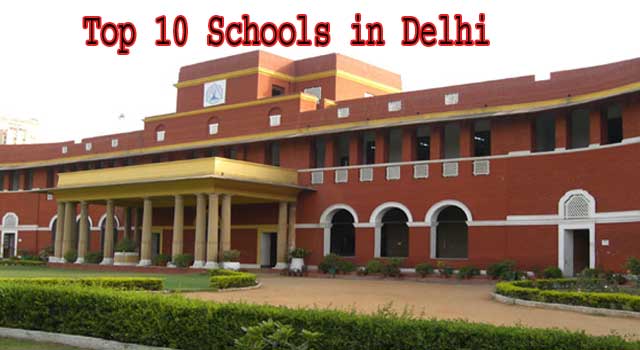 Here In This Topic, We Have Come With The List Of Top Most Renowned Schools Of Delhi As Well As India That Have A Name Written In Golden Words In The Books Of Best Institutions Of India And Serve At Their Best In Bringing The Best Out Of A Child. The Shri Ram School, Located In Vasant Vihar Serves Its Motto At Its Best Which Says,” Vidya Dadaati Vianayam” The School Was Established In July 1988 With Late Manju Bharat Ram As The Chairperson And Manika Sharma As The Director. Sudha Sahay Serves As The Principal And The Campuses Can Be Found In Vasant Vihar, New Delhi As Well As Moulsari Avenue, DLF III Gurgaon And Aravali-Hamilton Court Complex, Dlf Iv, Gurgaon. The School Is A Private Co-Educational One Serving At Its Best In Delhi As Well As India.

The Delhi Public School That Is Situated In Sector 12 Of R. K. Puram In 12 Acres Of Area Is A Public School With A Motto,” Service Before Self” And Was Established On 29th Of Jan 1972 With V.K. Shunglue As The Chairmen And Dr. D. R. Saini As The Principal Serves Its Best In Educating Its Students.

The Vasant Valley School Fulfills Its Motto,” Excellence In Deed” In True Senses And Was Established In June, 1990 And Is Located In Vasant Kunj Committed To Be One Of The Best Schools In Delhi And off Course India As Well. The School Is Directed By Mr. Arun Kapur With Approximately 1300 Students And Serves The Best With Every Coming Child To Its Campus.

The Mother’s International School, Located Near Sri Aurobindo Ashram – Delhi Branch, Sri Aurobindo Marg, New Delhi Serves Its Motto ,”More True, Forever, More True” Is A Secondary School Founded By Shri Surendra Nath Jauhar “Faquir” On 23 April, 1956 Serves To Be The Best In True Senses With Smt. Sanghamitra Ghosh As The Principal And Aims To Bring Out The Better Out Of The Best In A Child.

Sanskriti School, Located In The Diplomatic Area Of Chanakyapuri , In New Delhi Is A Co-Educational School Affiliated To Cbse, Which Offers Education From Classes Nursery To Xii And Has Is Consistently Been Ranked In The Top Schools Of Delhi And India Making Its Way In The Top Lists Of The Schools.

Springdales School, Located At The Dhaula Kooan Area Is A Privately Funded School Founded By Rajni Kumar And Is Affiliated To C.B.S.E Being A Co-Educational Schools Run By The Springdales School Society In New Delhi, India. The School Has Got Four Branches Four Branches Located Namely In Pusa Road, Dhaula Kuan, Jaipur And Kirti Nagar. The Former Indian President Dr. Apj Abdul Kalam Inaugurated This School.

The Modern School Barakhambha Road Delhi Is Located On The Barakhamba Road, New Delhi And Is A Private School Established In 1920 Founded By Lala Raghubeer Singh And Retired Major General Virender Singh Being Its President. Dr. Vijay Dutta Serves As The Principal With A Faculty Of 130 Members And A Strength Of 2800 And Area Of 27 Acres. The School Is A Co-Educational Private One Located Near Connaught Place.

Sardar Patel Vidyalaya, Which Is Located At Lodhi Road, New Delhi, India Was Established On 1st Of April, 1957 And Is Serving With A Faculty Of 60 Teachers Under The Observing Eyes Of The Principal, Ms Anuradha Joshi From Class Kg To 12th With Approximately 2000 Students Studying In It. The School Is Named After A Leader Of The Indian Independence Movement, And Independent India’s First Home Minister And Deputy Prime Minister, Sardar Vallabhbhai Patel Inspiring Young Minds To Remember What He Did For The Country And Encouraging Them To Be Like Him.

Bluebells International School, Located In Kailash, New Delhi, India, Is A Secondary School Under The Leadership Of Mrs Suman Kumar Serving As The Principal And Mrs G. Soni Who Is The Founding Principal As Well As The Current Manager Of The School. The School Was Established In 1957 And Aims To Fulfil Its Motto,” One Planet, The Earth; One Family, Mankind In True Senses Nurturing Their Students With Countless Activities, Sports And Other Extra Curricular At Its Best.

The Dps Dwarka, Delhi That Has Been Awarded As The Most Innovative K-12 School Award 2011 Is Situated At Sector Iii, Dwarka, In Ten Acre Land Affiliated With The Central Board Of Secondary Education And Missions To Bring Uniqueness In Every Child In A Congenial Atmosphere To Nurture The Young Minds To Dream Big ,Aspire, Explore And Achieve Their Aim In Life.