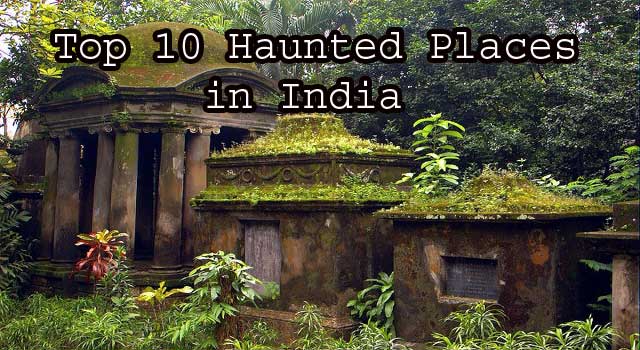 Bhangarh fort was built by Sawai Madho Singh with stones and bricks in 17th century in Rajasthan state of India. It is located on the border of the Sariska reserve in the Ravalli range of hills in the Alwar district of Rajasthan. This one has many numbers of deaths associated with it and thus comes amongst top ten haunted places of India.

G.P. block in Meerut is a haunted place located in the state of Uttar Pradesh and has a haunted story after it and is known for its mysterious activities. The city is said to be inhibited by lady mandodari (Rawana’s wife, all of them used to be demons as rawan was the king of demons) and hence this place is also termed as the home of Rawan’s In laws.

The Braog Tunnel or the tunnel no.33 has a length of 1143.61 meters is the longest kind of tunnel in Kalka. Shimla railways. This tunnel has many unfortunate miss happenings associated with its construction. A tragedy with Colonel Barog had happened while constructing it, he begin constructing it with the workers by boring the mountain, but unfortunately returned hopeless and that is the reason the tunnel has been named as the Barog tunnel.

D’Souza Chawl of Mahim, Mumbai is one of the top haunted places of India and is said to be haunted because of a woman’s spirit who died in it’s well. This well is haunted after the woman died painfully while trying to get the water and there are many other stories associated with it similar to this one making this place haunted.

This one is an urban beach along the Arabian sea region in India and is located 21 Kilometers south west of Surat City in the Indian State of Gujarat. This beach is known to be haunted for the miss-happenings that have taken place here over interval of time. This beach is located near Dariya Ganesh Temple.

Shaniwarwada fort was built by peshwa rulers of the Maratha empire in Pune in 1746. Shaniwarwada fort has got 5 gates. This place is counted amongst the top haunted places of india as many cases of deaths are associated with it and many paranormal activities have been reported here.

The Brij Raj Bhawan Palace is located in Kota place of Rajasthan. This place is counted amongst the top haunted places of Kota. This one used to be the palace of the former king of Kota. Here a Britisher Major Chasrles Burton was killed by the Indian sepoys and thus it is believed that his soul has possessed this palace.

This film city is located in the Anajpur village, Hayathnagar Mandal in Hyderabad, Telangana. This one is build in 2000 acres and is the largest integrated film city in the world. This one is associated with many cases depicting the presence of supernatural in its premises.

It is basically a hill station located 30kms away from Darjeeling which is famous for its tea. This one comes amongst the top haunted places of India in a way that many paranormal activities have been reported here. Some even say that spirits reside here. Many accidents have also taken place here that adds to the hauntedness of this place.

This one comes under the heritage sites and is a monument protected by the archaeological survey of India and is basically a step well 16 meters long and 15 meters wide consisting total 103 steps. The place is known to be haunted because of the sounds of pigeons and bats, adding an echo to the environment, making it a bit fearful and the cases of supernatural activities reported here.