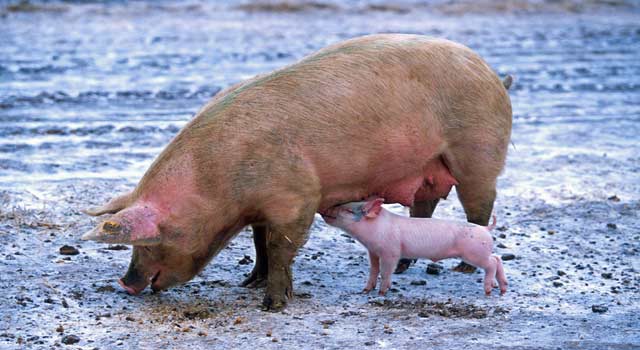 Pigs are the animals that may be wild as well as domestic. These ones have got large heads with a long snout that is joined to a prenasal bone that they bring in use so as to dig into the soil and find their food. The animal is four feeted and has got a tail as well. Pigs are widely used for their meat. You may find the city pigs feeding on the filth of other animals and eating up the food stuff in the garbage. The wild pigs depend on the food both from plants and other animals and here we are putting forward some facts about this animal for you. 1. Pigs have 44 teeth in their mouth and pigs are omnivorous which means that they can feed on both the plant products as well as the animal products.

3. It has been found that in some cases the mother might eat her off springs as well. This happens the most when the mother gets stressed because of some reason or the other. The success rate of piglets to stay alive is as low as 50%.

4. The wild pigs as well as domestic pigs, both are hunted down for flesh since time immemorial. Pigs are omnivorous and can feed on plants as well as animals. There are many cases reported about the pigs trying to attack small human babies as well.

5. The domestic pigs are often fed with soya meal or corn, grass as well as plant based leaves and fodder crops. The pig farms breed pigs to slaughter them for its, meat.

7. The meat of a pig is called “Pork” this is the type of meat that results after these pigs are slaughtered and then cut in pieces so as to be sold to the meat lovers. Pigs rather have an excellent ability to smell the things.

8. Pigs are born with relatively small lungs. Though there are several cases of attacks reported by this animal, but it is most often found attacking when somebody irritates it. A range of parasites and disease causing agents can be harbored by pigs that puts humans at a threat of getting transmitted with.

9. An adult pig may have a weight ranging from 300-350kgs while the smaller ones may reach from 45-50 kgs approximately and the middle aged ones may go from anywhere in between 50kgs to 350kgs. Pigs are often seen with an aggressive behavior that puts them at a risk of being viewed as a dangerous animal.

10. The wild pigs are often also kept in Zoo as well as animal centuries. The city of domestic pig or what we refer to as swine is associated with less cases of attacking, but still may prove to be aggressive in some of the cases when it is irritated.