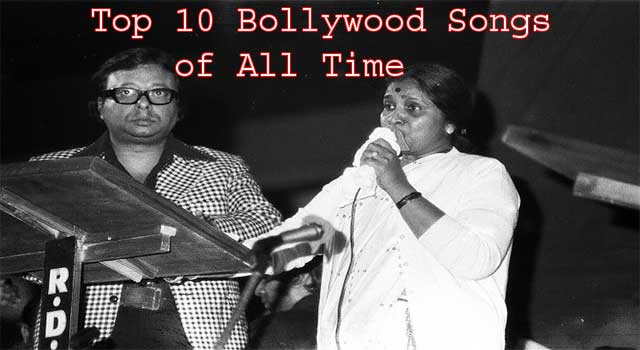 In this article we have come with the list of top ten Bollywood songs that have remained the all time favourite of everybody listening to them and likes to listen them again. List of Top 10 Popular Bollywood Songs of all Time

This song released on march 16, 2013 is sung by Arijit Singh & Palak Muchhal from the album Aashiqui 2 is a romantic song with a length of 4 minutes and 22 seconds released under the label of t-series is an awesome love song that everybody likes to listen. Mithoon has composed this song and was released by Bhushan Kumar.

“Kal Ho Na Ho” is a song sung by Shankar-Ehsaan-Loy from the album Kal Ho Na Ho released on 27 september 2003 is a romantic song with a length of 05 minutes and 23 seconds. This song was released under the label of Sony music with Javed Akhtar as the lyricist and Karan Johar being the producer.

The “Chaiyya Chaiyya” song sung by A.R.Rahman from the album Dil Se was released in 1998 and is of Bollywood, Filmi, Sufi genre with length being as long as 6 minutes and 48 seconds. The song has been sung under the label of Sony classical, Venus records and tapes and Gulzar has given lyrics for it.

“Pehla Nasha” is a song sung by Udit Narayan and Sadhana Sargam from the movie,” Jo Jeeta Wohi Sikandar is a song depicting the situation of a lover is a romantic song that has not lost its importance till yet and remains everybody’s favourite with a length of 4 minutes and 51 seconds.

“Mere Haath Mein” song from the movie, “Fanna” is a song sung by Sonu Nigam, Sunidhi Chauhan, Aamir Khan & Kajol with a length of 04 minutes and 48 seconds is a romantic song that every lover likes to play and listen. This song says the jeopardy of a lover who tells his beloved if her hands were in his hands, all the heaven could have come to him..

“Tujhe Dekha To Ye Jaana Sanam” Song From The Movie “Dilwale Dulhaniya Le Jaayenge” Is Sung By Lata Mangeshkar And Kumar Sanu Is As Long As 6 Minutes And 41 Seconds And Is Also A Romantic Song In Which A Lover Tells His Beloved That The Day He Saw Her, He Came To Know Love Is Insane And He Wants To Go Nowhere Else But Wants To Die In Her Arms” The Lyrics Are Simply Awesome And Thus This Song Has Never Ever Left Anybody’s Heart.

“Do Dil” song from the movie Pardes came in 1997 with Nadeem Shravan being the music director and Kumar Sanu being the singer and Anand Bakshi being the lyricist. The song means,” two hearts are meeting but secretly” this song has really got emotional wordings that touch the heart of everyone within no time. If you have ever fallen in love, you will really like this song.

“Dil Deewana” song from the movie “Maine Pyar Kiya” is directed by the music director Ram Laxman and has been sing in the beautiful voice of S.P. Balasubramaniam and Lata Mangeshkar with Dev Kohli being the lyricist. The song is an all time favourite of everybody due to its romantic wordings which mean,” the heart full of love can’t live without its beloved”.

“Panchi Nadiya Pawan Ke Zhonkey” song from the movie “Refugee” is a beautiful song with Anu Malik being the composer and Sonu Nigam and Alka Yagnik being the singers. This one is a patriotic song with the wordings meaning as,” birds, rivers, and blows of the wind can’t be withheld in boundaries. The song is as long as 9 minutes and 50 seconds and is made under the label of T-Series with Javed Akhtar being the lyricist.