Top 10 Bikes in India with Features – HowFlux
Skip to content 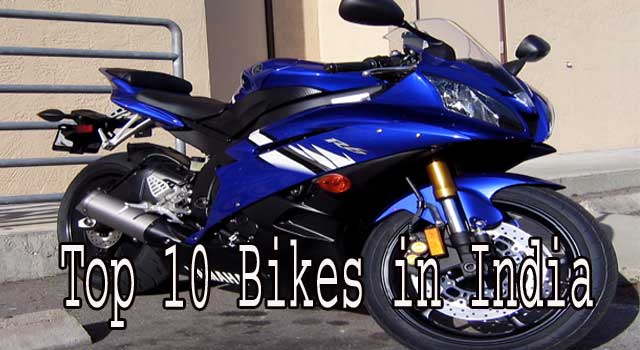 Everybody needs a beast running on two wheels enhanced with style, unleashed performance, mileage, average and sleek finish and people often get a bit choosy while selecting a bike for them and thus here we have come with top ten bikes in India that you can think to go for. Top 10 Bikes in India with Features

Yamaha Fazer that is priced about rupees 84,751 approximately in India is a powerful bike with elegant looks and a smooth riding experience. The speedometer is digital one, there is a shift light, the bike is basically an electric start one with a maintenance free battery and pillion backrest as well.

Bajaj pulsar is basically the best from Bajaj. This bike is available in various models depending on variable cc and engine power. Recently it has launched its pulsar RS-200 that proves to be an awesome choice to make for all being a power packed sports bike giving a tough competition to all its other bike counterparts.

Karizma is basically the best from its manufacturer, the hero moto Corp. This bike comes with disk brakes and a good seating and riding experience. The bike supports a 4 stroke, single cylinder DHC engine with a fabulous power and fantabulous speed. The fuel tank capacity is 15 liters and the bike is not lagging behind in any specifications.

The Royal Enfield Classic 350 has got a classical look in true senses and being a 350cc bike, it is a good choice to make. The engine is a four stroke type with a five speed gearbox and starts by both the means, including electric as well as kick start. The front brakes are the disk type while the rear brakes are drum types. Overall riding experience is simply awesome and the bike does not lack anywhere in any specification.

This one is a great choice to make within a price range of 62,976 Indian rupees approximately. The speedometer is analogue types with electric start feature as well. The bike has got awesome looks and does not legs behind in any term, be it performance or be it the seating comfort, the bike is simply an awesome choice to make for all.

Hero Honda Cbz Is an awesome choice for those who seek to look for a bike that is budget friendly as well as is having awesome looks. The bike gives a powerful mileage of 40-45kmpl that is enough for a bike and an air-cooled 4 stroke single cylinder engine with an awesome power as well as an awesome displacement of 149.2cc.

Bajaj Discover supports single cylinder 4 valve DTS-I with exhaust TEC and a powerful capacity. The bike is kick start as well as electric start. The bike supports 4gears transmission and Those who seek to look for a bike under budget that comes with a superb mileage as well as a superb average and driving experience must go for it.

The hero Honda splendor is a bike fitting in every budget with an affordable cost and a 4 stroke single cylinder OHC engine and a 4 speed gear box with shock absorbers and hydraulic suspension and a smooth breaking system. The low maintenance cost and high average and mileage rate makes this bike an awesome choice to make for all.

Yamaha Yzf R15 is a powerful bike within a price range of 1,19,466 Indian rupees and supports all the features of a powerful bike including digital meters, anti lock breaking system, back rests, trip meters and is an electric start motorcycle meeting the requirements of everyone.

Ktm Duke Is a devil in real sense. The power is awesome, the looks are sleek and the riding experience is simply smooth and powerful. The bike supports 6 speed transmission and a multi disc clutch with shock absorbers as well as disk breaks. The refined four stroke single cylinder with fuel injection makes it a perfect choice to make.