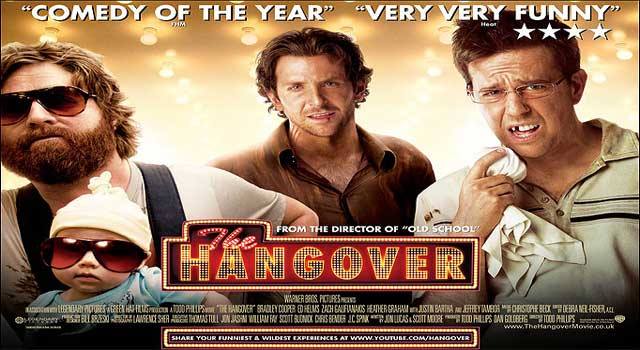 Here in this article we have come with a list of top ten movies from all over the world that have proved to be a huge success on box office and have made their name bright in the field of comedy entertainment. This movie directed and produced by Todd Phillips released in 2009 is an American comedy film featuring Bradley Cooper, Ed Helms, Zach Galifianakis, Heathar Graham, Mike Epps, Justin Bartha, and Jeffrey Tambor. Christophe Beck has given the music for it and tells the story of Phil Wenneck, Stu Price, and Alan Garner, who travels to Las Vegas for a bachelor party and then the story starts bringing fun and comedy out of the movie.

This movie is directed by Harold Ramis and features Bill Murray , Andie MacDowell and Chris Eliott as the main characters. This movie released in 1993 starts the story with Phil Connors, who is an arrogant Pittsburgh TV weatherman who covering an assignment for the annual groundhog day even creates a chaos with his comedy in the film.

This movie directed by Peter Farrely and Bobby Farrely featuring Jim Carrey, Jeff Daniels, Lauren Holly, Karen Duffy, Mike Starr, Charles Rocket and Teri Garr released in 1944 is an awesome American road buddy comedy film depicting two guys, good natured frineds from providence, Rhode island who set out ona cross country trip to Aspen Colorado to return a briefcase full of money to its owner, the moment when all the drama starts that makes this movie a worth to be watched.

This movie directed by Judd Apatow released in 2005 features Steve Carell, Catherine Keener, Paul Rudd, Romany Malco, Seth Rogen, Elizabeth Banks, Leslie Mann, and Jane Lynch being An American comedy that revolves around the story of a middle aged man’s journey to finally have sex. This one is a great comedy and a must watch film.

This movie released in 2007 directed by Greg Mottola featuring Jonah Hill, Michael Cera, Seth Rogen, Bill Hader, and Christopher Mintz-Plasse is a teen comedy film with the main characters given the same names as in real life . The story revolves around the school life and bringing comedy out of it.

This film directed by Adam McKay and released in in 2004 is a comedy film featuring Will Ferrell, Christina Applegate, Paul Rudd, Steve Crell, David Koechner, and Fred Willard is a comedy depicting San Diego TV station where Ferrell’s title character clashes with his new female counterpart creating a chaos and bringing the comedy out of the movie.

This movie directed by Tom Shadyak released in 1994 is a comedyfeaturing Jim Carrey, Courteney Cox, Sean Young, Tone Loc and Dan Marino is an American comedy depicting a private investigator living in Miami, florida who specializes in retrival of tame and captive animals and thus the story gets ahead creating comedy out of it. This one did a business of 107,217,396 dollars at box office.

This movie directed by Jim Abrahams, David Zucker, and Jerry Zucker featuring Robert Hays, Julie Hagerty released in 1980 features an ex-fighter pilot and taxi driver Ted Striker who became traumatized during an unnamed war leading to a pathological fear of flying. As a result, he is unable to hold a responsible job and thus the story begins with the entry of heroine who seeks to help him bringing comedy out of the movie.