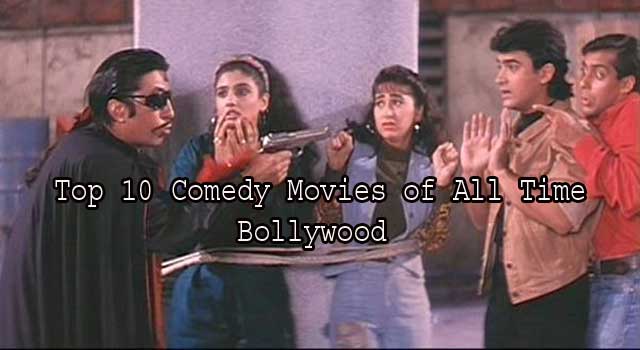 India is a land of cinema and Bollywood has always come with something new to spell bound its viewers and thus in this article we have focused on the top ten comedy movies on the basis of all time favorite votes of people. This movie directed by Raj kumar santoshi, is a superb comedy film starring Aamir khan, Salman khan, Raveena tondon, Karishma kapoor, Paresh rawal and Shakti kapoor. Tushar bhatiah has given the music and was released on 11th of april 1994. The story is of two males competing for the hand of their host and then getting drawn in love. The story has got villains that will make you laugh instead of crying. Mr. Go- go was my favorite part of this movie.

This movie directed by hrishikesh mukherjee, is a superb comedy featuring dharmendra as well as sharmila tagore, aamitabh bachchan, jaya bachchan, om prakash, usha kiran, david abraham cheulkar, asrani and kesho mukherjee who create a mess together and bring out a fun in this movie. Dharmendra is featured as a professor who falls in love with miss sulekha and then the story starts, the drama is superb, the comedy gets an extra star.

This movie directed by Priyadarshan, was released in 2000 and features akshay kumar, paresh rawal, sunil shetty and tabu. The whole mess is created after money and later on a kidnapping mystery that brings out the fun out of this movie. The sequel “phir hera pheri” is also an awesome movie again. All well when it ends well.

This movie directed by gulzaar, is a 1982 bollywood hindi comedy film with actors like sanjeev kumar, and devan verma in dual roles and all characters depict roles full of innocence. The story is all about identical twins separated after birth and meet in adulthood, bringing out the essence of comedy in the whole movie.

This movie directed by Rohit shetty was released in 2006 and the sequel is as hit as it was. Rohit shetty casted ajay devgn, arshad warsi, sharman joshi, tusshar kapoor and rimi sen inj lead roles. The story is about a blind couple who lost their grand son who lived in america and three brats who were seeking to get a shelter accidentally reach their house creating a chaos and bringing about the fun and comedy out of this movie.

This movie directed by raj kumar hirani, is a hit released in 2003 featuring sanjay dutt, sunil dutt, arshad warsi, jimmy shergil, gracy singh and boman irani. All the movie revolves around the story how patients are treated in hospitals as subjects instead of people and a bhaai of mumbai who challenges the dean of a medical university and later on wins the heart of everybody with a “jaadu ki jhappi”.

This movie directed by jyoti swaroop, is a hit comedy featuring sunil dutt, saira banu, kishore kumar and mehmood. Mehmood is a south indian musician who teaches the heroine who is a neighbor of sunil dutt who fakes to be a singer in front of her. This movie released in 1968 is a big hit with music given by r.d. Burman.

This movie directed by raj kumar hirani, is a comedy based on engineering life and is simply the best i like in modern movies. This movie released in december 2009 is a good comedy featuring aamir khan, kareena kapoor, madhavan, sharman joshi, boman irani and omi vaidya. This movie depicts engineering life as well as the truth of life. All of whom reunite and search ranchoddas, their classmate remembering the old golden moments they spend together at the ICE. their college.

This movie directed by satyam bose, is a story between two brothers (anoop kumar and ashok kumar) and their big brother, kishore kumar. The heroine madhubala has done an unexplainable role in this movie. The movie was released on january 1st 1958 and is simply a fabulous movie to watch.