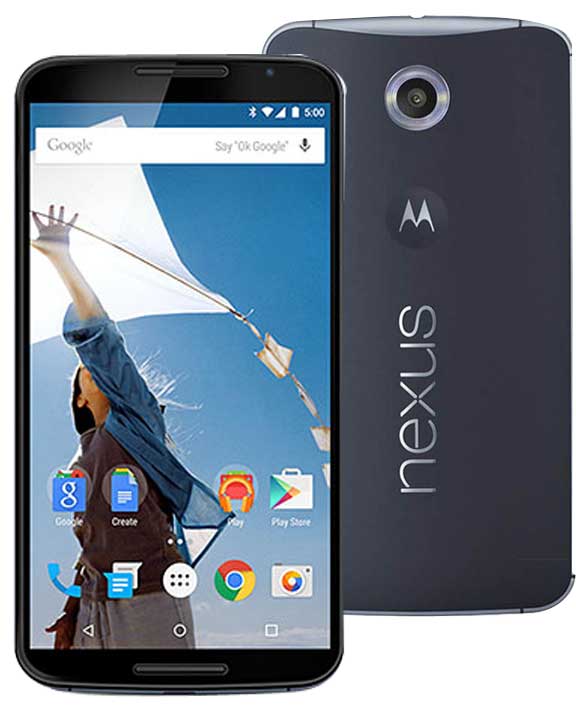 The Motorola NEXUS 6 was announced to be launched in October 2014 but was released in November 2014. The phone operates on a technology that supports the GSM or CDMA or HDSA or LTE technology for network access and comes up with a body of dimension 159.3x83x10.1mm (6.27×3.27×0.40 inches) the phone weights about 184grams and operates on a Nano Sim card. The phone is a water resistant one. Price of Motorola Nexus 6 is  Rs. 44,999.

The phone comes equipped with an Amoled capacitive touch screen with 16M colors. The phone is 5.96 inches in size and provides a protection of corning gorilla glass 3 and is a totally multi-touch gadget to have

The phone operates on an android operating system of version 5.0(lolipop) and operates on a QUAL COMM snap dragon 808 chipset. There is a central processing unit of quad core type 2.7GHZ krait 450 and a G.P.U of ADRENO 420.

There is no memory card slot in the phone but the phone supports 32/64G.B. internal memory and a RAM of 3G.B. that is itself a powerful one for multiple operations to be performed simultaneously at a single time and for a better gaming experience and a better downloading speed.

There is a primary 13M.P (4148 x 3096 pixels) camera in the phone that allows you to have excellent clicks of yourself and a secondary 2M.P. camera that become a perfect choice for you.
The phone supports an awesome picture quality with other features like the auto focus and optical image stability and dual LED flash that makes images so enhanced than ever. The phone supports the other imaging features like dual recording or geo-tagging or the touch focus or the face detection or the photo sphere or the panorama or the HDR shots. The phone provides a video quality of [email protected] and supports the optical stability also.

There is a Wifi of version 802.11 a/b/g/n/ac/ dual band Wifi direct with DLNA and hotspot that makes the Wi-Fi device implanted at your home to be connected with you phone and use the web-access without sparing money for another data plan.

There is a Bluetooth of version 4.1 A2DP, LE that can be used for tethering with your personal computer or for sending or receiving files to or from the other devices. The phone supports a Global Positioning System of type A-GPS GLONASS but there is no stereo FM radio in the phone. There is a micro USB of version 2.0(slim port) and a USB host in the device.

The phone comes equipped with the powerful sensors like the accelerometer or the gyro sensor or the proximity sensor or the compass sensor or the barometer sensor etc that make the device an ultra sensible one. The phone supports a HTML5 browser and supports java via JAVA MIDP emulator.

The nexus 6 comes with a non – removable Li-Po 3220 Mah battery that provides an excellent back up to the phone and sideways provides a standby of 330 hours and a talk time of 24 hours to the phone making it a powerful choice for you.