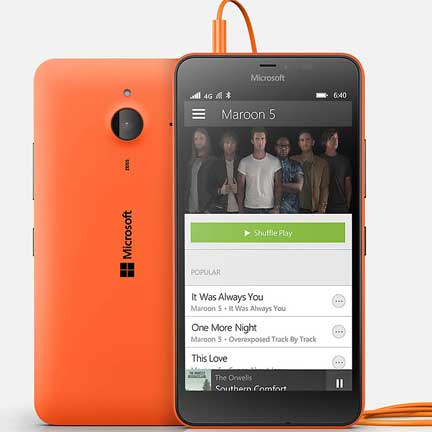 Microsoft Lumia 640 XL LTE comes equipped with IPS LCD capacitive touch screen with 16M colors and is sized about 5.7 inches and comes up with a resolution 720 x 1280 pixels and is a Multi touch one covering the protection standards of Corning Gorilla Glass 3 as well as Clear Black display.

Microsoft Lumia 640 XL LTE comes equipped with a micro SD Card slot that can support a memory S.D card up to 128 GB and an Internal 8 GB memory with a powerful 1 GB RAM that makes multiple applications accessible with the same device and boosts up the downloading speed as well.

Microsoft Lumia 640 XL LTE comes equipped with a Primary 13 MP camera that is about, 4128 x 3096 pixels, Carl Zeiss optics, and supports the features like autofocus along with a LED flash light and a Video quality of 1080p@30fps and a secondary 5 MP camera i.e. 1080p. The phone comes equipped with mp3 as well as Vibration; MP3 and WAV ringtone alert types and supports a Loudspeaker as well as a 3.5mm jack also.

Microsoft Lumia 640 XL LTE comes equipped with a WLAN Wi-Fi 802.11 b/g/n, DLNA with hotspot and a powerful Bluetooth of version 4.0, A2DP and supports GPS with A-GPS, GLONASS, Beidou there is an FM radio in the smart phone with which you can stay tuned to multiple radio stations as well. The smart phone comes equipped with micro USB of version 2.0 and powerful Sensors like Accelerometer, proximity sensor, compass sensor, sensor core etc. There is a powerful HTML5 browser that enhances your browsing speed, but there is no Java at all.