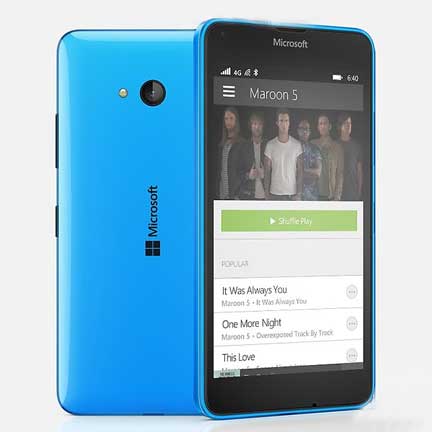 After Microsoft has taken over Nokia, the features have been continuously improving and so is the case with hardware and software specifications. Microsoft has proven its best in launching LUMIA 640 LTE that supports GSM ,HSPA and LTE technology and comes with a light weight of 145grams. The Microsoft Lumia 640 LTE was announced to be launched in March 2015 and got launched in April 2015 with a price of 11999 Indian rupees approximately. The Microsoft Lumia 640 LTE comes with body dimensions of 141.3 x 72.2 x 8.8 mm (5.56 x 2.84 x 0.35 inches) and operates on a micro SIM card. The phone comes with an IPS LCD capacitive touch screen with 16M colors and comes with a size of 5.0 inches and a powerful resolution of 720 x 1280 pixels. The phone is basically a multi touch device with elegant looks and trendy finish. The Microsoft Lumia 640 LTE comes with Corning Gorilla Glass 3 protection and Clear Black display.

The Microsoft Lumia 640 LTE uses a Microsoft Windows Phone 8.1 with LUMIA DENIM operating system and a Qualcomm MSM8926 Snapdragon 400 chipset and a Quad-core 1.2 GHz Cortex-A7 C.P.U with ADRENO 305 GPU enhancing its compatibility. The phone comes pre equipped with the world class sensors like Accelerometer, proximity sensor, compass sensor, etc. that boost the functioning of the handset and make it an ultra reliable device to have.

The Microsoft Lumia 640 LTE supports a micro SD card up to 128 GB memory and an Internal 8 GB memory with 1 GB RAM as well. Having a powerful RAM means having a better downloading speed and better functioning of the gadget. Talking about the camera, there is an 8 MP (3264 x 2448 pixels) camera with the features like auto focus and geo tagging. There is a LED flashlight that helps you enhance the quality of the pictures and videos clicked from the gadget. The video quality is simply awesome with a resolution of [email protected] but there is a secondary camera of 1 MP with video quality of 720p and I think Microsoft could even have given better than this. The phone supports mp3 as well as vibration alerts and wav ringtones plus there is a 3.5mm jack in the phone.

Microsoft Lumia 640 LTE comes with a WLAN Wi-Fi of type 802.11 b/g/n with DLNA and hotspot plus there is a Bluetooth of version 4.0 A2DP types plus there is a GPS of type A-GPS, GLONASS, BEIDOU and there is also a micro USB of version 2.0 and a powerful HTML5 web browser that boosts up the data suffering speed. Though the phone does not support Java at all but there is a plus point that it gives access to its One Drive providing 30 GB cloud storage for free to the user with a Microsoft account. There are other software’s like Document viewer and Photo/video editor that enhance the reliability of this phone and makes it ultra usable for both the families and businessmen.

Microsoft Lumia 640 LTE comes with a powerful Li-Ion 2500 MAH battery that gives an awesome back up to the phone plus the availability of phone with various shades including the colors like Glossy cyan, Orange, White, Matte black, etc. has made this phone an awesome choice to rely upon and the name of a big brand like Microsoft, is itself a worth for everyone.