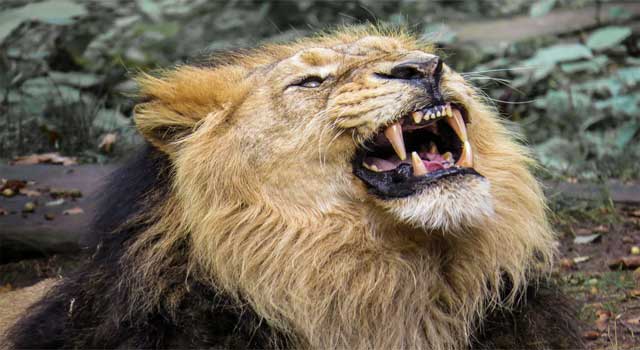 A lion is cat relative of the genus Panthera, which is one of the five big cat species.  Lion is the largest living cat after the tiger. A lion feeds on a prey that it catches from the wild. A lion will keep on standing in aiming position in the wilderness waiting for the prey to arrive and then it will attack its aim all of a sudden breaking its neck bone in order to kill it meanwhile. Lions catch their prey themselves.  Most of the Lions that you see in the zoo are hybrids of different sub-species that do not hunt themselves and instead are fed by the zoo authorities only. The exact way in which a lion attacks its prey can be described as follows:- How do Lions Attack and Kill their Prey

A lion is slow in the beginning, but it is always cautious about its prey. A lion maintains stays away from its prey in the beginning and observes it from a distance. The typical weight of a lion’s prey ranges from 100-112kgs. Lions mostly hunt zebras, deer, wild buffalos etc. They also hunt for fishes while sitting by the riverside. Lions hunt for smaller animals/fishes and even crocodiles when nothing big is available to satisfy their hunger. Hunting a buffalo proves to be a heavy prey. You can take it as a wild cat party.

2. They Also Feed Themselves from Already Dead Food:-

Young lions are good hunters. The old and sick lions also prefer feeding themselves like a scavenger. They obtain as much as 1/3rd part of their diet from prey hunted by other predators or eating other such already dead animals.

3. Lions Are Simply the Best Hunters:-

Lions are simply the best hunters ever. Lions have a plenty of animals available around them to hunt it as their prey. Even if a large prey like buffalo is not available, a lion will dip its foot inside a river and stand still while waiting for the fishes to arrive. Once any fish arrives, he would immediately grab it in its mouth to feed himself with it.

Lions are good hunters. They hunt very frequently in the evening and early morning. They hunt the most at night. They prefer hunting less during the day when the sun is above the head. A lion never prefers hunting an elephant when alone. A group of lions can easily defeat an elephant. Lions try to distract a baby elephant first from its group and then attack it in order to kill it. Lions also hunt for reptiles like crocodiles.

Most of the animals, aimed by a lion try running out of fear to save themselves. Many of them get stumbled and they fall a prey to lions that kill them in order to satisfy their hunger. Lions use their claws and jaws in order to break the bones of their prey. Most of the lions attack a prey at its neck and then grab the food pipe ripping their prey and eating its organs. Lions are heavy eaters. Even if an animal escapes and gets able to save itself from a lion, it soon dies because of infection caused by the claws to the wound. Most of the hunted animals die because of suffocation or asphyxia as they are not able to breathe and hence get suffocated.