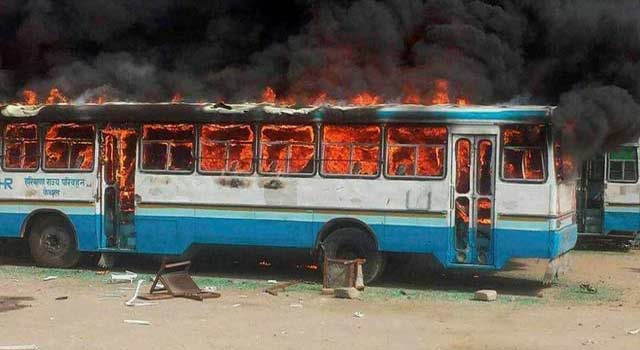 This February, the Jaat community of India stood up in order to fetch a position for themselves in the reservation quota. Reservation quota, which was introduced in order to uplift the poorer section of the society, is becoming a toddler’s toy for people on the name of politics and religion. I am myself a Jaat and I am one of those people who supported this movement as well. I know the good and bad points of this strike and perhaps this was the only reason I was asked to write on this topic. Well if you ask me honestly, every kind of strike affects the country’s economy in one way or the other. Jaat strike was no special case in all this. The Reason for This Strike:-

Jaat’s were proposed with a reservation in OBC quota by Chaudhary Bhupendra Singh Huda,who was the last Chief Minster of Haryana representing Congress party. Soon after this proposal, the new government of B.J.P arrived and this proposal was cancelled. Though BJP tried to calm out Jaat community with similar proposals and they all got calm. We all know that reservation is a kind of game that these politicians have been playing since decades and a change of government always means cancellation of proposals put forward by the previous ruling party.

Jaat community was calm till this time, but the fire got ignited when an M.P from B.J.P, Mr. Raj Kumar Saini spoke about this community in one of his gathering. I have myself heard his words,” A jaat is your friend till you have a stick in your hand”. He also made countless cheap comments about jaat community in this gathering convincing his people that he will completely eliminate all the jaat people from all political positions of Haryana soon.

The news spread like fire in all Haryana and soon Jaat people were seen on the roads in a large number. The Government had to announce to curfew and military was called. Jaat Community, Are They Innocent Or Criminals:-

Many people these days were addressing jaat people as criminals. You tell me one thing, if someone speaks cheap about you and your community, what will you do? Those who are habitual of not hearing your voice always need an explosion to hear and the same was done by the jaat community in this strike.

I agreed that it is not the right way to raise your voice; instead it should be done with peace. But there are always some people because of them; whole community has to face troubles. Where countless cases of fires and damage to roads were reported, cases of unseen humanity were also reported where jaat people were feeding people while preparing food for them who were struck in road jams because of road blockage. Outcomes of This Strike:-

I think this strike did not have any benefit for the jaat community or any other person in India or Haryana. The roads were broken, the buildings were burnt and people had to lose much because of this strike. Even the other communities had started talking about this issue much of which were saying that this effort does not worths any reservation at all. I think that .0instead jaat community should have fought for eliminating reservation completely. If jaat’s would have fought for completely eliminating the reservation system, I think that the entire nation would have ignited in this fire. The people of SC and ST quota who are much rich in terms of wealth, but who still avail this quota are the exact root cause that needs to be eliminated in India today and instead reservation should be given only in the terms of wealth or status. The people who are poor/handicapped or homeless just reserve this quota and no-one else should have the right to ask for it in terms of his or her caste. The effects of this jaat strike were obviously not positive. It bought about economic and political tensions in Haryana. Besides this, the strike caused a big amount of damage to public property in the form of fires, road breakage and other such forms. Though jaat community had raised up for a noble cause, but it proved to be an advantage for those who wished for a chance to arise a big political issue to change the government. This strike was suppressed as else it could take the form of a big political riot. Its effect on the economy of the country can be described as follows:- 1. Loss to the Government:-

Obviously the roads, buildings, railway stations and bus stands are constructed from the revenue that government gets. When these get damaged, there is a loss that government experiences and we face it in the name of increased fare for bus services, train fare etc. A number of buildings, bus stands, roads and other such property were damaged during this strike which proved to have a negative impact on the economy of the country. Many people died in this strike. Some even tried to combat with the army and were shot dead. Though they have been named as “Patriots” but still their family has cried a flood of tears on their name. The loss of property or income can be overcome once, but the loss of life can’t overcome ever.

3. Increase In The Amount of Taxes:-

The damaged roads will obviously demand repair and no jaat or non-jaat person is going to take a charge of this initiative. This will bring about an increase of taxes charged from people in the form of toll taxes and other such taxes, which will again prove to be an economical drawback. When people riot, they don’t work. Entire Haryana was blocked during this time. People could not reach their offices in time. The people in Delhi had also suffered a water crisis during this time. All schools were closed and all offices, shops and business workplaces were also closed. This caused a great loss of work and if we see it at national level, the nation has lost a lot during these few days.

Obviosuly when people do not work, there is a great loss of business as well. Most of the factories, companies etc. depend on middle men, transporters, shippers, managers, team members etc. who were stuck in traffic jams or could not reach their offices during this time. This proved to bring about a great loss of business for the country and hence its economy as well. Jaat’s were fighting for upliftment but instead this has bought about a downliftment of poor people. Most of the vegetable sellers, small shop owners, milkmen, egg sellers, cobblers, masons, carpenters etc. had to keep their shops/workplaces closed during this time.

Most of the people associated with these professions are so poor that they can’t even earn food for two times a day if they do not go to work. The people working in most of private firms suffered a loss of income. People could not make money transactions as both, banks and internet services were blocked. An effect of this on share market was seen as well. Most of my jaat brothers are farmers. A farmer is an innocent person as his living boundaries are limited to his village fields. The need of the hour is to realize the fact that violence strikes or riots never make benefit to mankind. A protest should never be done on roads and instead you can choose a safe place like a playground or some stadium for this purpose.

The nation is not affected because of this. Reservation is never about a community. It is about someone who really deserves it. The time has arrived that we do not fight for getting it and instead we should work for eliminating it so that the ones who really need it may get benefitted. The Prime Minister should soon launch a scheme of giving up “Reservation” as he had launched a scheme of giving up “gas subsidy”. Let us see if this works or not.