Information About Kinds of Dinosaurs – HowFlux
Skip to content 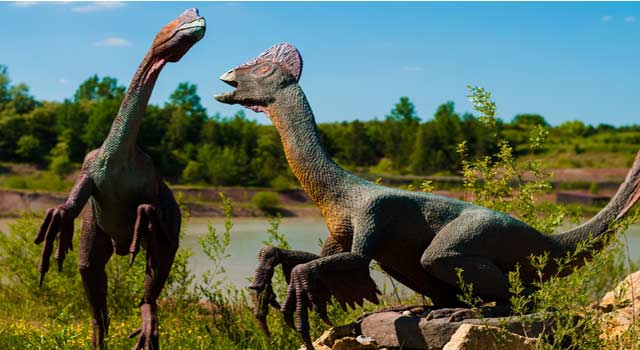 The Bio Data of A Dinosaur:-

Dinosaurs belong to the Animalia kingdom of animals and belong to the Chordata phylum and clade dinosauria. These ones are a diverse group of creatures that you may take as giant lizards. Some amongst them used to be herbivores and some used to be carnivores. Some could fly while the others lived on earth but approximately all of them reproduced and produced their off springs by laying eggs.

The Era of Dinosaurs:-

How We Came To Know About Dinosaurs?

It is thought that a natural disaster resulted in the ultimate death of all the dinosaurs on earth and the cretaceous age ultimately came to its end. The dead bodies of all these giant lizards or dinosaurs got buried deep in the soil and layer after layers of soil kept on depositing over them. The skin got deteriorated and bones got fossilized. The traces of the remnants of these creature’s fossils are made to be experimented by various scientists that study these remnants layer by layer and research on these fossils. The results of those researches enrich our knowledge about these creatures that died long back after the end of cretaceous age.

Till the date, many dinosaur species fossils have been found that have given us many estimates about these giants lizards. The fact that these dinosaurs could fly came to our knowledge when the fossil archaeopteryx was found which had a beak as well as feathers on its body and thus it gave a clear estimate that there were all kinds of dinosaurs and some of which could fly while the others lived on the land.

Many species of the dinosaur eggs have also been found that demonstrates us that these creatures used to lay eggs for producing their new generations. It has also been reported that dinosaurs used to build their nests and the tail of a dinosaur enabled it to balance its body which could grow as large as 45 feet in case of some dinosaurs. These creatures used to stand with their hind limbs erect and could be of any size depending on the specific type of dinosaur and the age related to it.