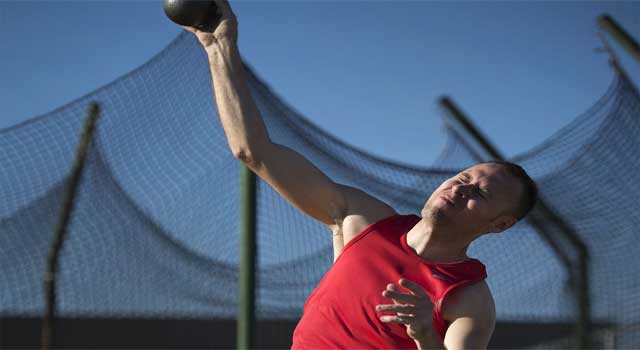 To throw a shot put is a great sport added even to the various national as well as international tournaments and is played domestically as well as beyond the boundaries of the nation. Even the basic institutional tournaments feature this sport as an event in them and it basically involves using your strength in order to throw a shot put. If you think you have got strength enough as to take part in this event, the tips that we are mentioning here might prove to be beneficial for you. How to Throw a Shot Put

The basic warm up is essential for the body to get stretched and prepare itself for the further part of exercise that you are to make in order to throw a shot-put. You may go for the running laps or the other stretching based exercises in order to go for it.

Regarding the way to throw and place a shot-put, I will say that it is not a rocket science and instead is an easy task for an individual of strength. Simply held the shot put at the base of your fingers

Instead of in your palm, with your fingers in a slightly spread apart position, bend the hand back and then try to keep your hand steady.

3. The position in which you have to remain:-

Simply stand straight with the shot put placed at the level of your neck and then bend your elbow keeping it aligned by your body. Try making this position several times so as to know proper alignment to be made and it is better if you keep a professional shot put player to keep yourself in surveillance of.

If you go by the internet, you will find many professional shot-put tournament videos uploaded over it featuring various professional players engaged with shot-put as a sport and you will even find some of the videos teaching you the exact way to do that and as it is the intention of humans that we learn better if we watch something physically, you will be able to throw it in a better way.

The rules of shot-put should be the best of your knowledge while you make a shot put throw in a way that if you make fouls more than the specified limit, you get disqualified and thus your efforts get wasted.  Making yourself familiar with this sport can really make you a star of this sport.

The rest if just a part of practice from your side and you will get sorted. Simply try practicing more and more so as to make yourself perfect in the same and engage with a trainer if you can. Else keep on practicing making your moves better and developing your stamina as well as strength bringing about the betterment of best in yourself.