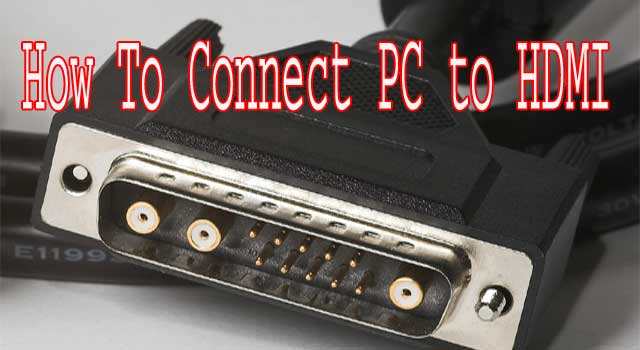 How to Connect PC to TV through HDMI Cable

Ways To Connect Your Computer And P.C

1. Guess the port your gadgets come up with and purchase the cable that connects the both.
2. WI-FI connection where you can connect your television set with the help of WI-F.

How To Know The Port Your P.C. And Television Come With :-

suppose that your computer comes along with V.G.A output port it will be of a rectangular shape with 15 pins placed in 3 rows with 5 pins in each row being the most commonly seen monitor and personal computer connection and with digital video interface port which is generally regular in shape with 24pins placed in 3 rows with eight pins in each row and this type of port is designed for high definitional interface especially and suppose there is a circular port with 4/7/or 9 pins in it m, then it is a circular S-VIDEO port and suppose there is a port that looks somewhat like a U.S.B port but is a long and thin one designed for high definition connections this one is the HDMI port which is designed especially for the HIGH DEFINITION connections and suppose there is a circular type of jack that is usually color coded in yellow.

modern devices come equipped with WI-FI facility and if either of the devices (computer and television both) have WI-FI in them, the devices can be connected with the help of Wi-Fi also by switching the television and computer to WI-FI mode and then connecting both to the same network and following the displayed instructions and entering the pass code for the network and following the displayed info in the control panel of the computer.

What If There Is No Sound After Connection?

suppose after making the connection, there is no sound, you just need to purchase an audio cable and connect both the devices though the sound cable is not needed in the case of HDMI devices but if there is no sound, the audio cable needs to be connected from the 3.5mm audio slot of your computer and the television that comes with an earphone icon and you just need to check if the wirings are properly made and then switch off your computer and then restart it again. The p.c. has now been connected to the television.