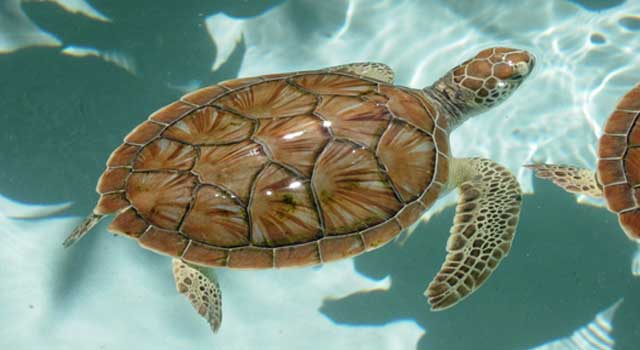 Turtles are counted amongst the group of ectotherms and these have got a cold blooded body. These have got their body covered with a strong kind of shell that they bring in use for hiding the soft parts of their body when attacked. A turtle will simply get his legs and head inside when some predator will try to attack it and these can live as long as 300 years in age. Here we are providing some facts about turtles that are sure to make you mesmerized. Turtles are generally cold blooded. The internal temperature of a turtle’s body differs according to the environment in which it is residing and this is why it is cold blooded. Turtles have got a beak which is rigid and it can use its jaws to cut the food and chew it. Turtles don’t have teeth.

There is a kind of special bony or cartilaginous shell with a turtle’s back that gets developed from their ribs and serves as a shield against the enemies that try to attack it in search of food. The enemies find it difficult for them to crush this shell under their jaws and hence choose to move ahead in search of some other food.

3. Turtles Are an Endangered Species:-

There are about 327 known species of turtles alive in today’s world and some of them are highly endangered which means close to extinction.

4. Turtles Lay Eggs but not underwater:-

Like most of the other water inhabitants, turtles also do not lay eggs underwater and instead choose to arrive on land and lay eggs. Do not get shocked; turtles can breathe, open air as well. The baby turtles come out of these eggs and then get back to the water.

5. The Looking Habits of Turtles:-

Most of the turtles will be found with their eyes looking down at objects in Front of them while they are not in water. Some of the turtles are also found to have their eyes closer to the top of head, which is why it gives us such a look.

The eggs that a turtle lays is slightly soft and a kind of leathery. The eggs might be spherical or elongated and the albumen of a turtle’s egg is while in color. The protein in a turtle’s egg does not get coagulated when you try to cook it.

Some of the turtles can live even as long as 300 years and the age of a turtle can be calculated counting the rings that are formed by the stack of smaller, older scutes on top of the larger, newer ones.

Turtles can even reach as long as 7 feet and a few species are even reported to be as long as 200-220 centimeters.

Turtles can reach a weight as heavy as 1000 kilograms. The leatherback sea turtle has been found to have a shell length of 200 cm and a weight of over 900 kilograms.

Turtles are believed to have lived even before the age of humans. Some of the turtles are found to be the oldest living creatures on the earth and the earliest known members of this group date from 157 million years ago.