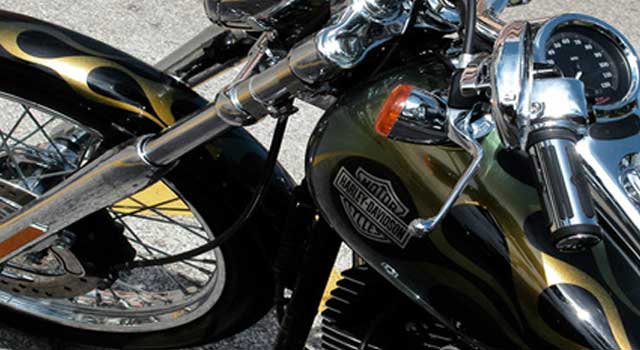 Harley Davidson is an American motorcycle manufacturing company, which was founded in Milwaukee, Wisconsin in 1903. This motorcycle brand is very much popular amongst motor bike riders and thus Harley is one of the best motorcycle brands that one likes to purchase. Harley Davidson bikes are manufactured in American factories, but people from all over the world demand them and thus even the teenagers and bikers are likely to expect some of Harley’s qualities in their motor bikes and one such quality is the sound that this bike generates. In order to make your bike sound like Harley, you can bring in use the following tips:- Positioning any kind of bike with a growling exhaust system can really be a help for you in making your bike sound like Harley.  One such exhaust system is “Turbo Spoke” bicycle exhaust system which is based on a clamping and amplification system once attached to your bicycle will make it sound like a roaring Harley.

Every bike has its own noise. For example, even bullet motorcycle is characterized by its particular noise if we talk about bikes separate than Harley and thus we can give our bike a special separate kind of sound to give it a unique kind of effect. This can include the usage of metal strips or card glued or taped up against the bike’s wheel to generate sound. You can even position small bids in each of your bicycle tire’s to make them generate sound.

3. Use a Pre-Recorded Sound Player Horn:-

Most of our bikes come pre-positioned with a horn but if we reach market, we can get many pre-recorded and after-recordable horns which can be purchased and bought home for the purpose of recording or playing the pre-recorded Harley sound while riding the bike in place of the traditional horn. Most of such horns are battery operated and thus they are easy to be used.

4. Make Experiments with the Bike’s Silencer:-

I have seen products like motorbike exhaust system and sound generators many a times on websites like E-bay and thus even you can search one such website to find a sound generating device for your motor bike from one such website. You can get a variety of similar products online by just searching about their names online with any particular search engine like Google or Yahoo etc. Just write “Bike Exhaust system” or “Bike Sound Generator” and a variety of results will get displayed on screen.