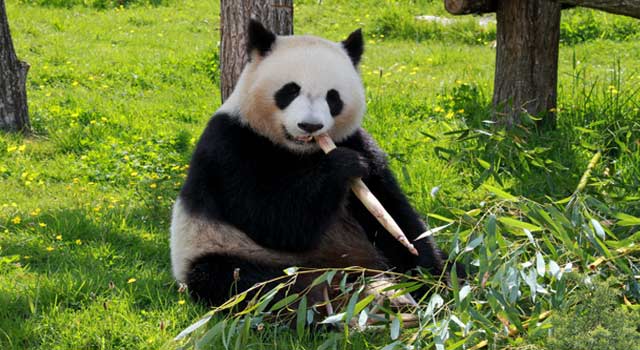 Panda refers to the species of bear that are often black and white in looks and is a furry creature. Pandas often look much cute and innocent creatures as compared to the other wild bears. These are found in the parts of China and have got large black patches surrounding the eyes, ears and the other parts of the body. This bear feeds on Bamboo the most and may even choose to hunt wild birds sometimes and thus it is said to come amongst the carnivores. The major of its diet constitutes of the wild grass, bamboo and other such plant based items only. Here we are listing some of the facts that we found to be interesting enough to be shared with you.

1. Pandas never go on hibernation that is a long wintery sleep that most of its bear counterparts choose to go for in winters. The panda is listed amongst world’s endangered species and has got a furry coat over its body that saves it from the wintery climate of its habitat.

2. Panda is regarded to be a terrestrial bear that lives in some mountain ranges in Parts of Central China and spends its life roaming for food that primarily includes the bamboo as the major food that it relishes upon. Pandas never even find a den for themselves to live in and instead take shelter in hollow woods and tree tops.

3. There are 25 bamboo species that a Pandas can eat ravishingly. The protein in bamboo is the major source of nourishment for this animal. Often in captivity, this animal is fed only with bamboo, but sometimes it may even choose to kill wild birds so as to make them its food.

4. The baby or offspring of a panda is called a cub. At the time of birth, the baby panda may measure about 100-200 grams in weight and may range from 15-20cms in size.

6. Pandas have been featured in various product advertisements like Cadbury gems and children like the panda toys that these products come with. There are many films that have featured this animal in them. The movie Kung Fu panda became a great success amongst children and people of all aged groups.

7. There are five fingers in a normal panda’s paw. There is a thumb that helps it to hold the bamboo from one side and then it makes the usage of its hands to break bamboo and chew it up in a slow motion son as to relish its juices.

8. The adult pandas may grow from 4-6 feet in height and may measure 2-3 feet tall at the shoulder. A panda’s tail may measure about 10-15 cms and their life span may range from 20-30 years or even more in case of captivity.