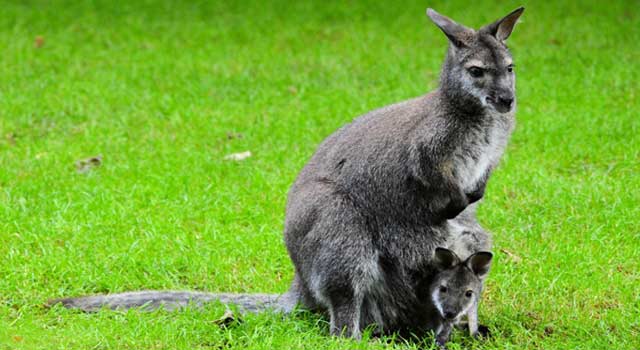 2. According to a fact, there are not as much humans in Australia as there lives the number of kangaroos.

3. Red kangaroos may grow up to 2 meters in size and they can hop up to a speed of 65kmph. Kangaroos are good swimmers and in water they make use of their legs kicking them so as to swim unlike the case of land where they move their hind legs together so as to go for hopping.

4. Kangaroos are found to use the process of hopping as a means of locomotion unlike the other animals who generally walk or run. In one leap, a kangaroo can jump about 3 meters high and 7.5 meters long.

5. Talking about hopping, only kangaroos are the animal on this planet that uses the process as a means of traveling. This process enables them to cover a large distance in a single interval of time.

6. A kangaroo baby travels from the birth canal to the pouch where it spends several months before it gets able to leave. Female kangaroo can easily determine if the baby is a male or female and can even control the gestation process if it sees some harm in bringing the Joey or baby to this world.

8. Often it is seen that a young kangaroo baby jumps to the mother’s pouch only when it gets frightened.

9. A kangaroo can move its ears in different directions without even physically touching it so as to hear what’s going around and make an estimate of the surrounding danger.