10 Interesting and Unusual Facts about Tigers – HowFlux
Skip to content 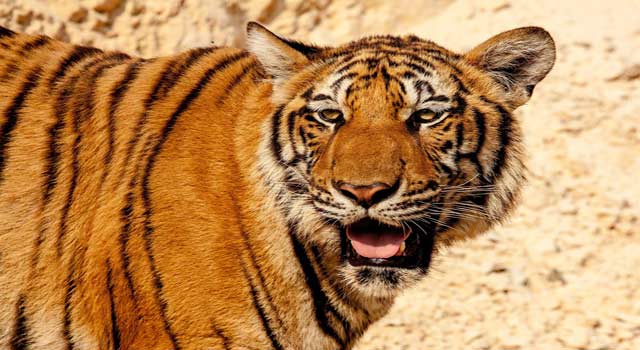 The scientific name of Tiger is “Panthera Tigris”. This animal is a wild cat that is quiet dangerous and has remained the favorite hunted animal of kings and jungle explorers till the ancient times. This one is a carnivores animal that chooses to hunt its food rather than finding it from trees and bushes. Tigers are awesome hunters and may kill their prey in a couple of seconds. This one is the largest species of cats and is endangered now in most of the regions due to rapid deforestations and reckless poaching and hunting of it. Here are some interesting facts about this animal that are sure to make you get spell bound to it. 10 Interesting and Unusual Facts about Tigers

1. The total body length of a tiger may reach over 11 feet in size and an average tiger may weight about 388.7 Kg in the wild. This animal is endangered and people often hunt it for its skin that has got a million dollar value.

2. Almost all the tigers have got a fury skin that is reddish orange in color and has got dark ventricle strips on it. The female tigers are comparatively smaller than the males.

3. In Indian subcontinent, there are approximately about 2000 tigers left and the number is still decreasing. Earlier these used to be employed in circus shows, but then it was banned by the Indian government as these animals were standing on a point of extinction and the health of circus animals always stayed at a risk.

4. A tiger has got powerful forelimbs that it makes use of while walking. The tail is quite long that waves when it runs so as to kill a prey and a large head that gives it a massive look.

5. The Bengal tiger and the Siberian tiger are referred to be the tallest living subspecies of tigers In contemporary Indian subcontinent.

6. The tail of a tiger may get from 25 to 43 inches in size that is quiet long for a massive animal. The skull length may go from 10 to 12 inches in size.

7. The fossil remnants have told us that the tigers used to live in the areas of Asia, Siberia, Philippines and Indonesia but then later on They got extinct from the parts of Western Asia and then later on the loss of habitat due to deforestation and animal related sicknesses make them extinct much rapidly from the areas of Philippines as well as the other Asian parts as well.

8. Today Sumatra is the only continent that has got a flourishing number of tigers inhabiting the island. They are also present in the Indian subcontinent as well as The other subparts of China and south east Asia.

9. Tigers mark their territory by urinating in that area. Nobody dares to enter that territory after it gets marked and if any other tiger even enters that territory, He has to face the head of that group by fighting with him.

10. Tigers are found to be awesome swimmers and they may swim up to 29 kms a day and cross up to 7 kms of river in an across manner. Tigers choose to stand still in the river water and then catch the underwater prey all of a sudden by grabbing it by the powerful head jaws.