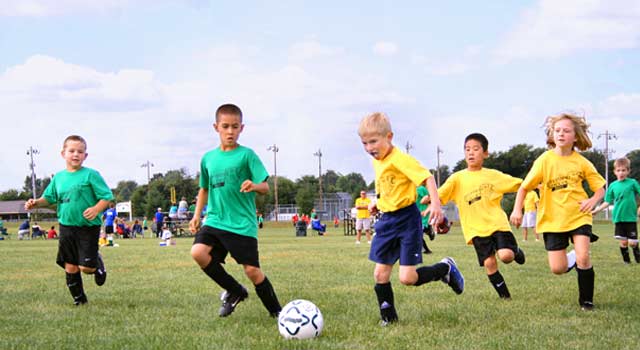 You can take outdoor games as the games that you can play out of the house, in some park, garden or somewhere else in the open like some ground or an open place. These games are mostly played in groups and thus are of a great fun for all. Frisbee is a plastic made flying disk that is actually not having any wings for flying, but is made in such a way that when you throw it with full force, it reaches the other side in a flying like way. Flying disk based games are most popular amongst people with all aged groups and can be a great source of fun for kids as well.

This game can be played between any number of players and just includes all the players to hide out somewhere while one of the players counts up to ten and thus he has to find them one by one and the game continues this way. This game is a great source of entertainment when played outdoors.

Cricket is a game that just needs a bat, a ball, some players and that’s it if it is the case of kids, they are bound with no rules but just to make runs. You can fix up an over for each of them to bat and the others will get indulged in bowling while one will be on the batting side to play and make runs.

If the kids are somewhat grown up young age, you can choose to play games like badminton with them. You just need to fix up the net area and you will just need two rackets and a shuttlecock afterwards. Kids are bound with no rules and thus they can play this game as well.

You can even choose to go for the dodging based games as well. In these types of games one of the players has to run in order to catch the others while the others try to run away of him so as to not let him catch them.

You can also manage to play some singing song based games in which you simply need to sing songs one by one. This one can be played with kids and that too with any number of them. You are on a picnic or anywhere else, this one is simply the best game to play with kids.

The three claps game just involves a player to stand in front of a line with face straight ahead and make three claps with his hands. The other players can move till he makes the claps, but when he finishes doing it, all of the players will get freeze and who so ever makes a move first will lose the game.

If there is no game that has been able to satisfy your kids, you simply need to inflate a balloon and give it to the kids letting them play with it with their punches giving it a rise in the air. Balloons are rather cheap and can be easily inflated as well.

This one is also a perfect outdoor game for the kids and it involves one player to run after the others to freeze them, saying ice and whosoever he touches will have to act like the player has got freeze and the rest of the players will have to get the freeze player back to life again by saying water after touching him

10. Playing With Top and Marbles:-

Kids can even choose to play with some marbles or top as well while playing outwards, but the needle of top is sharp and kids should be let to play an elder’s surveillance while doing so. Marbles are slippery and can make somebody fall if walking on them and thus a great care should be taken if kids are allowed to play these types of games.