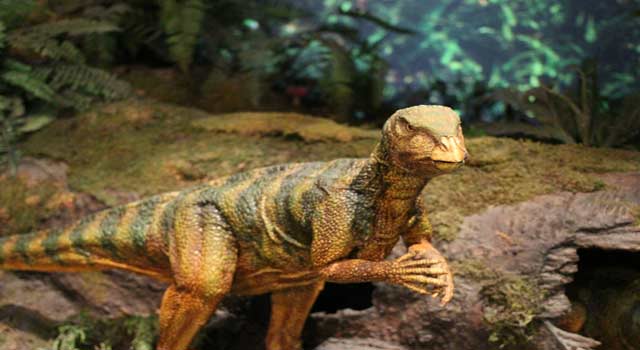 Talking about dinosaurs, these were the lizard like species of animals that once lived on this planet. Some of the dinosaurs were herbivores while the others were carnivores. Some had wings to fly and some were based on the land. The Jurassic and Triassic period deals with the age of dinosaurs and you may take them as a big lizards that ultimately met their end and do not exist in today’s world and only their fossils are left deep buried in the soil that scientists make research upon. Here we are providing some facts about this big lizard that will leave you overwhelmed for sure. 1. The proof that dinosaurs could fly has been obtained from the dinosaur fossil named as Archaeopteryx that has got feathers with it depicting that dinosaurs were having wings and they could fly as well.

2. The first generation of dinosaurs existed on this planet approximately 230 million years ago. These were an ancestors to the giant lizards that used to live this planet before them.

3. The modern day relatives of dinosaurs can be referred to as the crocodiles and house lizards.

4. The three periods of dinosaur’s life can be taken as the Jurassic age, the Triassic age and the Cretaceous age. All these three ages are a part of Mesozoic age what we refer to as the Middle life.
The name Jurassic park in the movie Jurassic park does not depicts a park, but it actually has been taken from the age of dinosaurs.

5. The carnivores dinosaurs were called as the theropods. These used to hunt the other small creatures and used to feed on their meat to survive in the wild. These are also referred to as the beast footed dinosaurs and has got sharp claws on their feet to kill their prey.

6. The fossils of dinosaurs have been found in approximately all the parts of world, including the extremely icy areas like Antarctica as well.

7. The dinosaurs used to balance their body while running by the means of their tail that could be as long as 45 feet.

8. About 40 types of dinosaur eggs have been discovered till yet and approximately all dinosaurs produced their off springs by laying eggs.

10. The dinosaurs got extinct approximately 65.5 millions of years ago. There have been many documentary films produced about these creatures and they way they got extinct. Countless theories have been put forward for this phenomenon and many of the researchers are still working on finding the further details about it.